From Heraldry of the World
Your site history : Kehl
Jump to navigation Jump to search 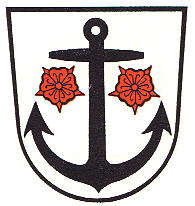 Margrave Karl Friedrich of Baden granted fortified town near the village of Kehl city rights in 1774. The fortress became known as the city of Kehl, whereas the village remained Kehl-Dorf.

From 1808-1814 the city was part of France and since part of Baden and Baden-Württemberg.

The oldest seal of Kehl is known since 1612 and shows in a complicated shield the arms of the three local vassals of the Margraves of Baden. After Kehl received city rights a new seal was made, which showed the Imperial eagle with in a breast shield the arms of Baden.
Besides the city of Kehl, the nearby village of Kehl used a different seal in 1811 showing a shield with a wheel with four spokes.

The present arms appear for the first time in the seal of the city in 1829. The colours were first officially described in 1899. When Kehl-Dorf was incorporated into Kehl city in 1910 the two roses were replaced by the wheel of the seal of Kehl-Dorf. In 1934 the city replaced these arms with the more historical arms with the roses.

The anchor symbolises the importance of Kehl as a city on the Rhein river. The meaning of the roses is not known.