Difference between revisions of "Kent"

From Heraldry of the World
Your site history : Kent
Jump to navigation Jump to search 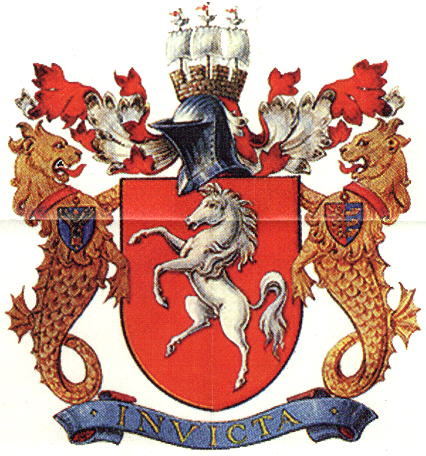 Arms : Gules a Horse forcene Argent.
Crest : Issuant from a Mural Crown proper three Masts rigged with courses set and topsails furled proper flying from each masthead a Pennon Argent charged with a Cross Gules.
Supporters : On either side a Sea Lion or gorged with a Collar Gules pendent there from an Escutcheon the dexter of the Arms of the See of Canterbury and the sinister of the Arms of the Cinque Ports.
Motto: 'INVICTA' - Unconquered

The white horse of Kent is supposedly the old symbol for the Saxon kingdom of Kent, dating from the 6-8th century. The crest shows a mural crown, which symbolises the many castles in the county, as well as the independent Saxon kingdom of Kent. The sails are symbols for the strong ties of the county with the sea and stand for the navy, the mercantile marine and fisheries.The sea lions are also a symbol for the strong ties with the navy, the lion being the British lion. The sea lions also symbolise that Kent is the frontier of Britain with continental Europe.

The left supporter wears the arms of the Cinque Ports, five harbour cities that had to provide support for the English navy until modern times. Four of these cities are in Kent. The arms are three lions with ship hulls as tails.

The right supporter wears a shield with the arms of the Archbishopric of Canterbury, founded in 597 by St. Augustine. Canterbury is in Kent.

The motto means 'unconquered'. In 1067, shortly after the Norman Conquest (1066, as every schoolboy knows), a detachment of Kentishmen ambushed the newly crowned King William and surrounded him. In return for his life, he promised that the county would be able to keep its ancient privileges - thus Kent was the only part of England unconquered by the Normans (that is, according to legend).

Literature : Leaflet provided by the Kent County Council, autumn 1999 and from from here.