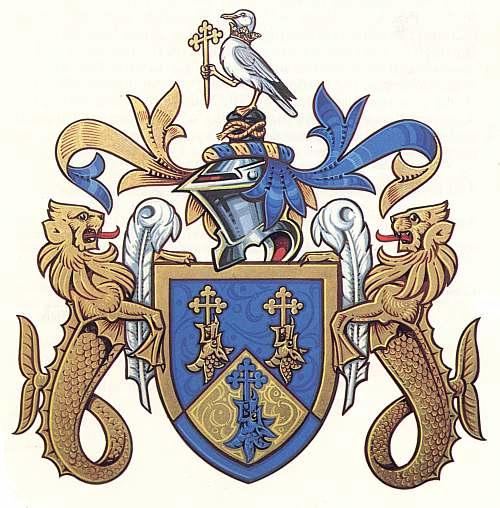 Arms : Per chevron Azure and Or three Dragons' Heads erect and erased each transfixed through the mouth by a Cross botonny fitchy all within a Bordure per chevron counter-changed.
Crest : Upon a Wreath Or and Azure upon a Bollard Sable roped Or a Seagull proper gorged with a Coronet and holding in the dexter claw a Cross botonny fitchy Or.
Supporters : On either side a Sea Lion Or supporting with the exterior leg an Ostrich Feather Argent.

The shield is basically the arms of the ancient Borough of King's Lynn which were recorded at the College of Arms as early as 1563. They refer of course to the legend of St. Margaret of Antioch who has been portrayed on the Seals of Lynn since the 13th Century, and to whom the Parish Church is dedicated. She was the Christian daughter of a pagan priest and was imprisoned for her faith. She was devoured by Satan in the form of a dragon, but she wore a cross by whose power she was able to burst the dragon open and emerge unhurt. Her symbol is, therefore, a dragon's had pierced by a cross.

The per chevron division and the addition of a bordure serve to make the new shield distinct from the old one while retaining much of its medieval simplicity. The bordure also suggests the wider boundaries of the new authority, and the new shield is composed of seven parts to symbolise the seven authorities which were amalgamated.

The seagull in the crest is an appropriate maritime reference. It occurred as a Supporter in the Arms of the Borough of King's Lynn but here it stands on a bollard in order to make it distinctive. It is gorged with a crown or coronet like the King's Lynn Supporter, and the lion in the crest of Downham R.D.C. The coronet refers to the Borough's many royal connections. The seagull holds a cross botonny like the crosses in the shield, and the cross crossiets in the arms of Freebridge Lynn R.D.C.

The supporters are based on the crest of Hunstanton U.D.C. The lion is a version of the lions or leopards in the English Royal Arms and its fishes tail suggests the Borough's links with the sea.