From Heraldry of the World
Your site history : Knittlingen
Jump to navigation Jump to search 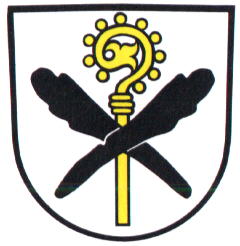 Knittlingen became a city in the 14th century as a possession of the Maulbronn Abbey. In 1534 the city became part of Württemberg. The oldest known seal dates from around 1400 and already shows the composition as on the arms. The oldest use as arms dates from 1596. The two sticks/clubs (Knittel) are canting, the crosier stands for the Maulbronn Abbey. Even after the transfer to Württemberg the crosier remained in the arms.

After the merger with Freudenstein the arms were granted on August 27, 1976, with the crosier now behind the clubs.