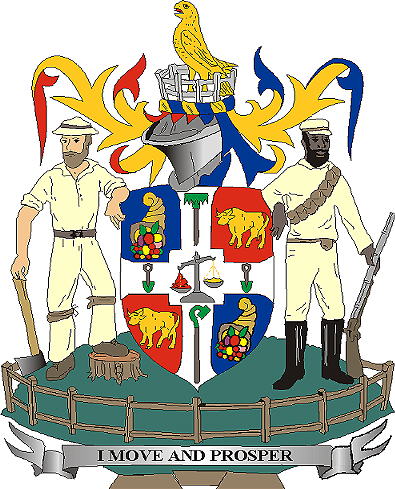 The shield is divided into four quarters, separated by the Southern Cross. In the quarters of the shield are the Cornucopia, representing prosperity and the vast orchards that were in the area and two bullocks, indicative of the transportation mode in the early days.

The spade, rake and hoe are the agriculture implements used in the many market gardens, while in the centre is a balance and scales, in one of which is a brick symbolising the building growth that has occurred in Knox and the change toward urban development.

The falcon on the crest has been used by the municipality as a symbol since the Shire of Knox was constituted in 1963.

The Woodcutter is representative of the numerous timber cutters who worked in the area and the Aboriginal tracker relates to the Native Police Corps who were located in Knox in the 1840s.

Literature : Information send to me by the Council of Knox, Victoria, Australia.