From Heraldry of the World
Your site history : Lac de la Haute Sûre
Jump to navigation Jump to search 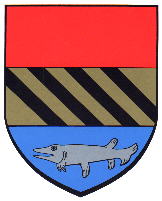 The municipality was created in 1978 and both older municipalities did not have their own arms.

The red chief with the golden field is taken from the arms of the Wiltz Estate, to which the area historically belonged. The black bends are taken from the arms of the Prevosts of Bastogne, who also had several possessions in the area. Their arms showed four black bends of gold. The base shows a pike, a symbol for the Haute-Sûre lake, after which the municipality is named.