From Heraldry of the World
Your site history : Lake Macquarie
Jump to navigation Jump to search 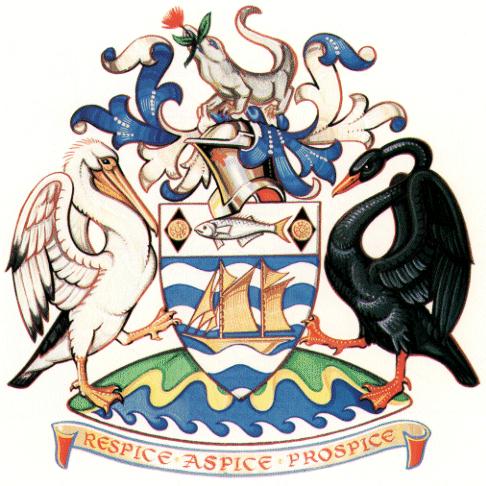 The arms were granted in December 1970.

The main portion of the shield represents the waves of the Lake. A two-masted schooner is superimposed on the shield, representing the "Martha" which was commanded by Captain William Reid when he discovered Lake Macquarie in the year 1800.

In the centre of the upper portion of the shield is a fish representing the fishing industry and the close association of the Shire with the sea's life. On either side of the fish is a black diamond featuring a tree in cross-section representing the coal and timber industries respectively.

The base on which the shield stands represents the entrance to Lake Macquarie from the Pacific Ocean, with the surf breaking on the golden sands of the numerous beaches along the coastal foreshore of the Shire bordering the fertile green of the land.

The crest shows an Iguana. The Iguana was the god of the Awabakal Tribe of Aborigines which lived in the Lake district at the time of the white settlement. The Iguana is holding a waratah bloom coloured in natural red and green.

The shield is supported on the left hand side by a Pelican and on the right by a Black Swan. Both these birds are to be found on Lake Macquarie.

The motto "Respice, Aspice, Perspice" means "Survey the Past, Examine the Present, Look to the Future".