From Heraldry of the World
Your site history : Liverpool John Moores University
Jump to navigation Jump to search 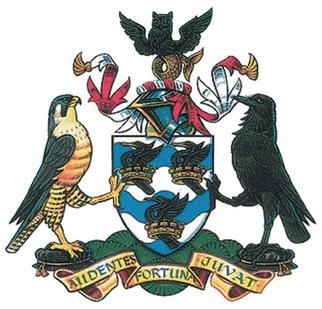 Arms: Barry wavy of six Argent and Azure three Cormorants rising wings addorsed Sable sans legs beaked Or and each enfiling a Mercantile Crown Gold
Crest: upon a helm with a Wreath Argent and Gules a Sea Owl displayed Sable beaked and the piscine parts Gold.
Supporters: Dexter a Peregrine Falcon and Sinister a Raven each statant on a Doctoral Hat upon a compartment comprising a grassy mount all proper.
Motto: Audentes Fortuna Juvat.

The arms were officially granted on September 16, 1989 to the Liverpool Polytechnic.

The arms incorporates symbols of the academic world (the mythical Sea Owl and two Doctoral Hats) and the City of Liverpool (three Cormorants represent the famous Liver Birds and the three Mercantile Crowns and waves depict the City's maritime tradition). The Raven symbolises outreach (the first bird to leave The Ark), while the Peregrine Falcon (a new breeding bird to Liverpool in 1989) symbolises the Incorporation of the Polytechnic on 1st April 1989 as a new Higher Education Corporation.