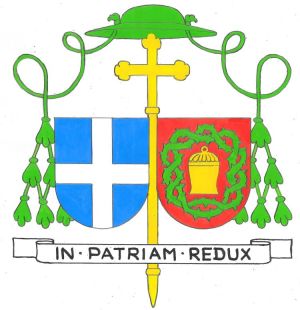 The bishop used two shields, which was fashion at the time; one with the arms of the diocese, the other with his personal arms. The personal arms show a thorn-wreath, probably referring to the French King Saint Louis, his patron saint, who is often depicted with such a crown. The vessel is a vessel used for the sacred oil used as one of the sacraments. The total combination also refers to the suffering of humanity during the First World War.