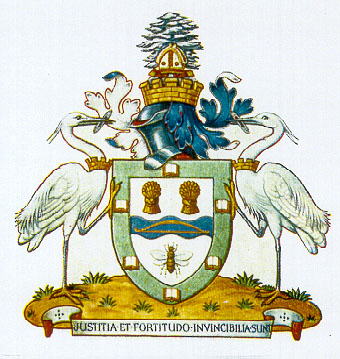 Arms : Argent, on a Fess wavy Azure between in chief two Garbs of Wheat and in base a Bee volant proper a Long Bow Or a Bordure Vert charged with six open Books of the Field edged and bound gold.
Crest : Out of a Mural Crown Or a Mount Vert thereon in front of a Cedar Tree a Mitre proper. Mantling: Azure, doubled Argent.
Supporters : On either side an Egret proper gorged with a Mural Crown Or in the beak a Shuttle also proper.
Motto: 'Justitia et Fortitudo Invincibilia Sunt'.

The wavy fess with the hunter's Bow represents the Hunter River, which bisects the city. The shield rests on a compartment of the brown alluvial soil surrounding the city, with the Sheaves indicating agriculture, the Bee, industry, and the open Books, the schools and colleges in the city. The golden borders to the books suggest wealth.

The Cedar Tree on the green mount recalls the area before European settlement, with the Mitre representing the Catholic Diocese of Maitland and the Mural Crown signifying the dignity of the city. The tree looks to be a conifer a true cedar as in Cedars of Lebanon, not the Australian red cedar which is not a conifer. Red Cedar was an important timber tree along the coast in the past.

The Egrets represent the birds of the low-lying wetlands surrounding the city, while the Shuttles stand for the city's main industry, textiles.

The Motto symbolizes the spirit of the community in rising above adversities, such as floods, and fostering of progress.