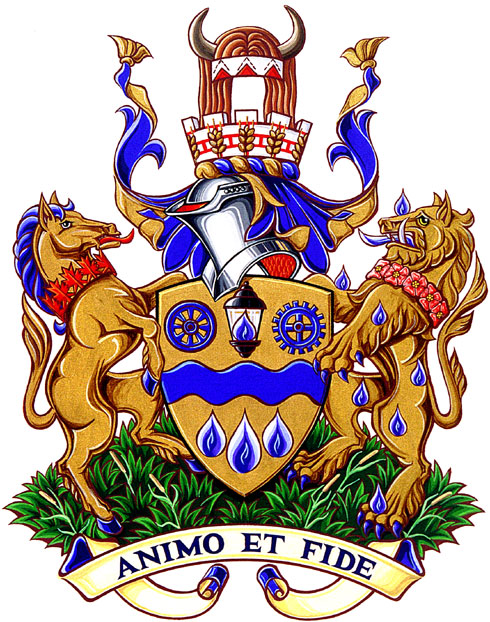 Arms: Or a fess wavy Azure between in chief an exterior gaslight mantle tempore 1906 Sable and Argent flamant Azure and Bleu céleste between dexter a steam locomotive wheel sinister a cogwheel Azure and in base three flames also Azure garnished Bleu céleste;
Crest: Issuant from a mural coronet Argent masoned Gules adorned with ears of wheat Or a First Nation's medicine man's traditional headdress proper;
Supporters: On a mound of prairie grass proper dexter a horse Or maned and unguled Azure gorged with a collar erablé Gules sinister a tyger Or armed and langued Azure semé and heightened of flames Azure garnished Bleu céleste gorged with a collar of wild rose flowers proper;
Motto : ANIMO ET FIDE ("With courage and faith");

The golden field of the shield represents the prairie ranchlands and the wealth created by the community. The wavy bar is the South Saskatchewan river that runs through the city.

Above the bar is a gaslight with a flame. The city is largely dependent on natural gas and the nickname of Medicine Hat is the Gas City. The wheels are a steam locomotive wheel for the importance of the railway for the development of the city, and a cogwheel representing industry.

The base of the shield represents the natural gas reserves.

The crown represents the city character of Medicine Hat and the wheatears represent the agricultural land surrounding the city. The crest shows a canting traditional head dress of a First Nation's medicine man.

The supporters are a horse and a tyger. The horse symbolises the importance of ranching in the region and the transportation in the first decades of the development of the city. The horse wears a collar with the Canadian maple leaf.
The tyger represents the energy and dynamism of the city and its body is highlighted with gas flames. The tyger wears a collar with the rose of Alberta.

The shield and supporters are placed on a compartment, symbolising the prairie.