From Heraldry of the World
Your site history : National Arms of Botswana
Jump to navigation Jump to search 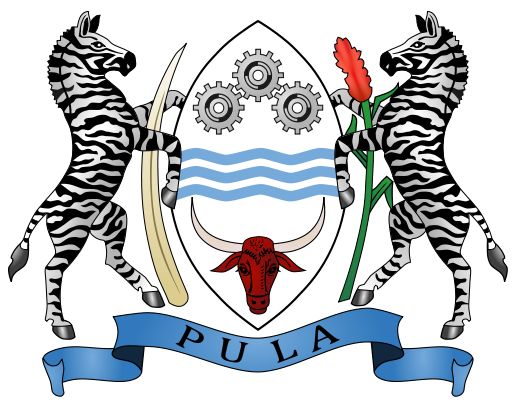 The shape of the shield is rather strange, as it is a shape used by many tribes in the eastern part of Africa (Kenya, Tanzania), and also in the eastern part of South Africa but not by the Tswana tribes in Botswana. The cog wheels symbolise mining and industry in the country. The waves symbolise the (few) rivers in the country, and the importance of water. The bull's head symbolises the importance of cattle herding for the economy of the country.

The supporters are two zebra (Equus zebra), which are common among the wildlife in Botswana. The supporters hold an elephant's tusk, as a symbol for the former ivory trade, and an ear of sorghum (millet, Sorghum bicolour), the main local crop.

The motto Pula means Rain, indicating the importance of rain (and water) for the country. It is also used as a normal greeting in the country.