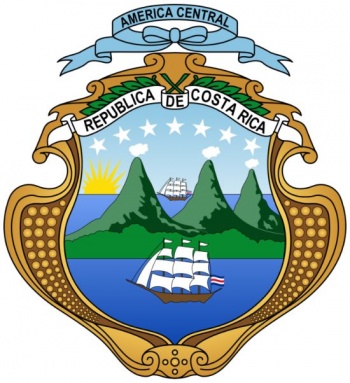 The arms basically show the country between the Atlantic and Pacific Oceans, a rising sun, two merchant ships and three volcanoes.

The initial design showed the arms surrounded by military weapons, flags and cornucopia, which were removed in 1906. In 1964 two additional stars were added, as the number of provinces increased from 5 to 7. In 1998 the only addition was to add smoke from the volcanoes, to distinguish them from ordinary mountains.

After the independence of Costa Rica in 1840, the new country initially used a seal with a star. Only in 1848 the official State Arms were designed.

Use of arms in collector's items

The four versions of the arms on coins :