From Heraldry of the World
Your site history : Special:UserLogin > National Arms of Saint Kitts and Nevis
Jump to navigation Jump to search

The National Arms of Saint Kitts and Nevis 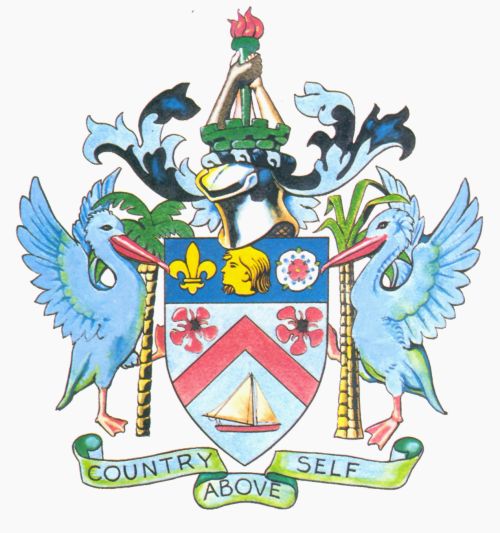 In 1871 St. Kitts (St. Christopher), Nevis, Anguilla, Antigua and the British Virgin Islands were united as the Leeward Islands crown colony. In 1882 St. Kitts, Nevis and Anguilla became a separate colony and this remained officially so until 1980, although de facto Anguilla was separated in 1967 (see Anguilla).

Until 1957 the three islands had their own badges. For St. Christopher a badge showing Columbus, for Nevis three virgins near a waterfall. For Anguilla a fisherman with a rowing boat.

On June 4, 1957 the three badges were combined to for new arms for the colony.

The islands have been in the possession of both the French and the English, which is depicted in the top of the shield: a local Indian's head between a French lily and English rose. Below are the Santa Maria, the flagship of Columbus as well as two local Poinciana-flowers. Above the shield three hands, a black, white and mixed-coloured, hold together a candle. The supporters are two pelicans, who hold a coconut palm and a sugar cane plant. The motto Unity in Trinity referred to the three islands.

When St. Kitts and Nevis became independent in 1983 the arms were slightly changed. The ship was slightly changed and the motto was replaced by the new motto 'Country above self'.