From Heraldry of the World
Your site history : Neuwied (kreis)
Jump to navigation Jump to search 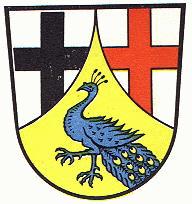 The two crosses in the arms are the arms of the States of Trier (red) and Köln (black). Both states had many possessions in the district. The peacock is taken from the arms of the Counts of Wied (since 1784 Princes of Wied-Neuwied), who were the most important local noble family for many centuries.