History: Formed at Gosport in March 1916. 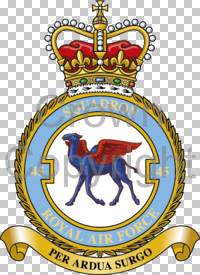 The Winged Camel symbolises the fact that the Squadron flew Camel Aircraft during World War I. It also symbolise the long period the Squadron was stationed in the Middle East.
The Motto translates as "Through difficulties I arise". The Badge was approved in October 1936.