From Heraldry of the World
Your site history : Norfolk
Jump to navigation Jump to search 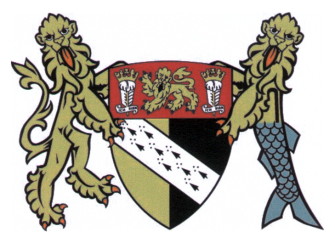 Arms : Per pale Or and Sable a Bend Ermine on a Chief Gules a Lion passant guardant of the first between two Ostrich Plumes Argent quilled and each ensigned with a Prince's Coronet thereon the motto "Ich Dien" as borne on the Banner of King Edward III.
Supporters : On either side a Lion guardant Or that on the sinister dimidiating a Herring erect Argent.

The top part of the shield, shows a lion from the Royal arms of England together with ostrich plumes and coronet referring to the Prince of Wales. This is a very special honour for the County Council, the King, in the Royal Licence, specifically instructs on the design of the arms to be granted "in commemoration of our long residence in Norfolk". This refers to Sandringham.

The lower part of the shield comprises the arms attributted to Ralph de Gael or Guader, first Earl of Norfolk circa 1069. The ermine may well refer to Brittany as Ralph was Lord of Gael in that Duchy.

The Lion represents the City of Norwich and the lion joined with a herring the Borough of Great Yarmouth, both were former county boroughs and were re-absorbed into the County in 1974.