From Heraldry of the World
Your site history : Norfolk County
Jump to navigation Jump to search

Do not confuse with Norfolk County Council (UK) 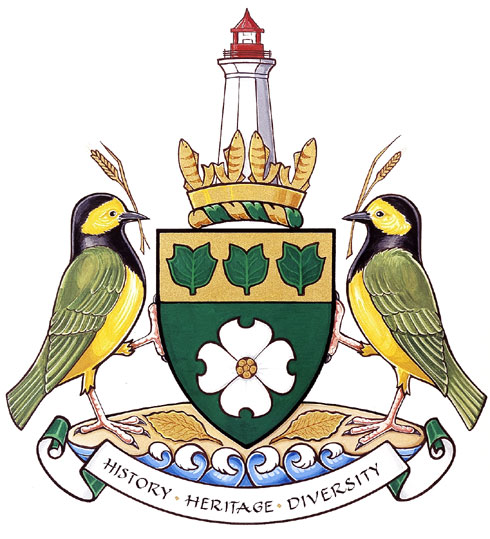 Arms : Vert an Eastern dogwood flower (Cornus florida) Argent seeded Or, on a chief Or three tulip tree (Liriodendron tulipifera) leaves Vert.
Crest: Issuant from a circlet set on the upper edge with yellow perch addorsed Or, the Long Point lighthouse proper.
Supporters: Two hooded warblers (Wilsonia critrina) proper, that to the dexter holding in its beak an ear of wheat, that to the sinister holding in its beak an ear of rye Or, both standing on a sandy mound set on waves and charged with tobacco leaves proper.
Motto: HISTORY • HERITAGE • DIVERSITY

The arms were officially granted on February 20, 2004.

The perch on the crown indicate the sport fishing important to the region. The Long Point lighthouse, built in 1916 at the tip of Long Point peninsula in Lake Erie, is a local architectural landmark.

In Canada, the hooded warbler is found only in Norfolk County, which makes the appearance of these beautiful birds unique in Canadian heraldry. The ears of grain they hold and the tobacco leaves below them indicate some of the important crops grown in the County. The sandy compartment on which they stand marks the County's location on the north shore of Lake Erie, especially the intrusion of the Long Point peninsula.