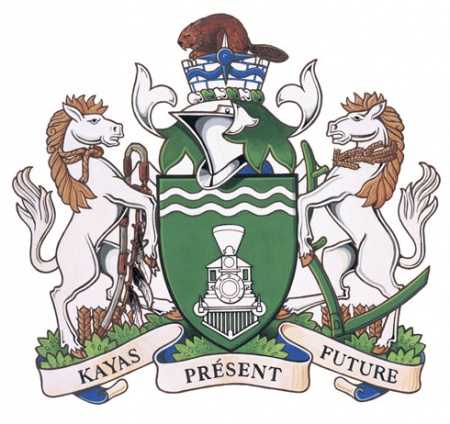 Official blazon :
Arms : Vert a steam locomotive affronty, in chief a bar gemel wavy Argent
Crest : A beaver couchant proper on a mural coronet Argent masoned, charged with a bar wavy and surmounted by a compass rose Azure the north point Argent
Supporters: Two horses Argent maned and unguled Or, that to the dexter gorged of a rope and supporting a Cree medicine staff proper, that to the sinister gorged of a collar of wheat Or and supporting a scythe, both standing on a grassy mound Vert set with wheat Or
Motto: KAYAS • PRÉSENT • FUTURE;

The steam engine symbolizes the important role that the railroad played in creating what was to become North Battleford. The two wavy bars represent the North Saskatchewan and the Battle Rivers, which brought explorers hoping to find a path to the Pacific Ocean, as well as three different companies dealing in the wealth of furs: the Hudson’s Bay Company, the North West Company, and the XY Company. With the number of settlers, this area was, at one time, the site of the capital of the North West Territories.

A mural coronet with its crenellated battlement is made unique for this municipality by having the blue wavy line and masonry lines allude to bricks laid in water, thus forming stepping-stones across water. With the compass rose, this coronet is an allusion to the name North Battleford. The beaver pelt was a standard of barter and trade, and four beavers are found in the arms of the Hudson’s Bay Company.

The supporters allude to the evolution of the population in the area. The Cree displaced the Blackfoot and met the European explorers and traders. Horses became important to the Cree for domestic security and spiritual reasons. With the disappearance of the buffalo, growing crops became the source of food. Migration brought more settlers to take up land grants and the broad prairies of grassland under the work of plough horses became a sea of golden wheat to be harvested by the scythe and its successors.

The ideas of “The Past, the Present, and the Future” are in three languages: KAYAS in Cree means “the past”; PRÉSENT, in French, for “the present”, and FUTURE, in English, for the future.

Literature : Image and information from http://archive.gg.ca/