From Heraldry of the World
Your site history : Oadby
Jump to navigation Jump to search

Incorporated into : 1974 Oadby and Wigston 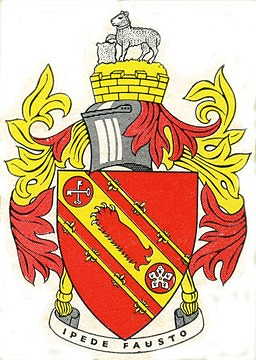 Arms : Gules on a Bend cotised flory counter-flory Or a Lion's Gamb erased bendwise of the field between two Torteaux that in the chief charged with two Keys in saltire wards upwards and outwards Argent and that in base with a pierced Cinquefoil Ermine.
Crest : Out of a Mural Crown Or a Mount Vert thereon a Lamb passant gorged with a Collar of Steel and resting the dexter forehoof upon a Pelt all proper.
Motto: 'I PEDE FAUSTO'.

The lion's leg refers to the Oadby Brabazon and Powys-Keck families. The cinquefoil is from the arms of the County Council and the keys presumably refer to the dedication of the parish church to St. Peter.

The mural crown is a symbol of civic government. The lamb and pelt refer to the woollen, hosiery and footwear industries.