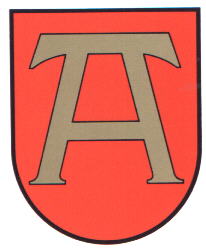 Obermarsberg has a long history and was already an important town in the 9th century. The oldest seal of the town is known since 1200 and showed a city wall and two towers. The next seals showed both the Bishop of Köln and the Abbott of Corvey, who ruled the town together. After 1507 the town was ruled by the bishops alone and the seal showed St. Mary and a key for St. Peter, the patron saint of Köln. The seals never showed the letter A, which can be seen in the arms.

The arms were based on the coins issued in the town since the early 13th century. The coins showed the letter A as well as a St. Peter as the patron saint.