Office of the Lieutenant-Governor of Ontario

OFFICE OF THE LIEUTENANT-GOVERNOR OF ONTARIO 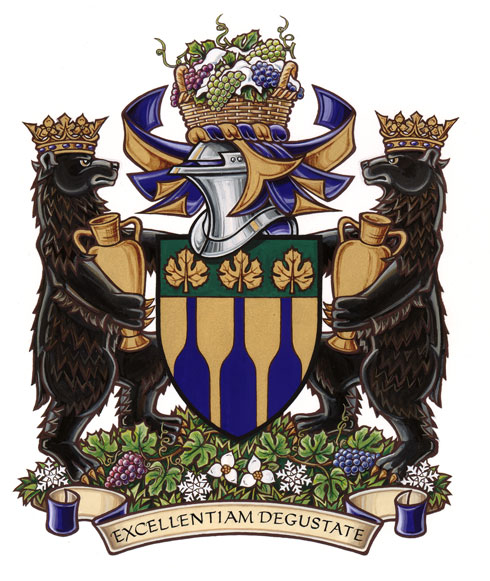 Arms: Or three wine bottles throughout Purpure, on a chief Vert three grape leaves Or.
Crest: A basket of grapes proper.
Supporters: Two black bears proper each wearing a coronet of maple leaves and trillium flowers Or jewelled Purpure, holding an amphora Or and standing on grassy mount set with grape vines, trillium flowers and snowflakes proper.
Motto: EXCELLENTIAM DEGUSTATE

The arms were officially granted on November 15, 2011.

The pattern suggests bottles or glasses of red and white wine, represented by the purple and gold colours respectively. The grape leaves provide another wine reference, and the three of them on green allude to the arms of the province of Ontario, which includes a sprig of three gold maple leaves on green.

The basket indicates the bounty of Ontario grapes, the basis for its celebrated wines. The use of ice and snow refers to ice wine, for which Ontario is particularly famous.

The bears refer to the black bear crest of the province of Ontario. The coronets are composed of the national and provincial floral emblems, the maple leaf and the trillium flower, and the provincial mineral emblem, amethyst, and thus refer to the role of the Lieutenant-Governor of Ontario in the award program. The amphorae are ancient containers for wine, indicating the antiquity of viticulture. The trillium flowers on the base allude to Ontario, and the snowflakes are a further reference to ice wine.

The motto means "Taste the excellence".

Literature : Image and information from http://reg.gg.ca