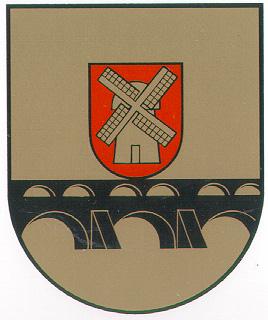 The arms were officially granted on November 24, 1993.

The arms refer to the 3 old windmills that survived in the city, as well as to the unique arched bridge in the town.

In 1968 another arms were granted: on a field divided per pale red and blue two silver wheatears.

The municipality complained that arms was too less specific for Pakruojis, also it reflected the district more than the city. So new arms with local urban landmarks were designed in the 1990s.