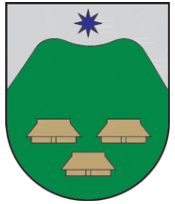 Papile is known since 1253 in written sources as a castle and village in the Keklis land. The castle was destroyed in 1341 by Livonian Order. The town never had historical arms, so the Lithuanian heraldry commision decided to show in the arms a village at the foot of a mound (a site of ancient castle), corresponding to the name of the town, which means just "a settlement at castle". In the upper part of the arms there is an eightpointed star. It means creative work, fertility and love. The standard of the arms was created by Saulius Bajorinas.