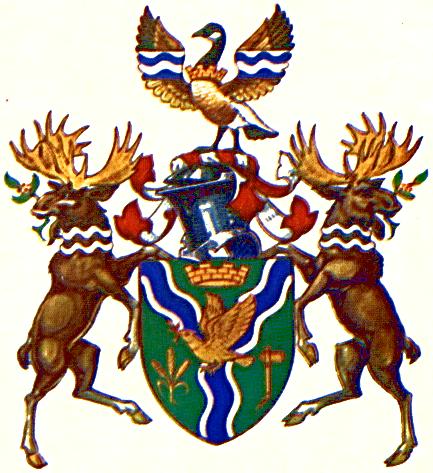 These arms were granted in 1967 by the College of Arms in England.

The wavy blue pall on the green field represents the confluence of the Smokey and Peace rivers and the surrounding agricultural land. The tomahawk, the dove with the olive branch, and the olive branches in the supporter's mouths represent Peace Point, a place near the town where the Beaver and Cree first nations settled a dispute (thus the name of the river).

The crest and supporters are a Canada goose and moose, respectively, both fairly common in the area. The moose are collared with rivers (reflecting the town's name), while the goose is banded with rivers on its wings and collared with a mural coronet (indicating that these are civic and not personal arms).

It is uncommon for a grant of arms to include supporters without a compartment or motto. Presumably they had some reason to eschew either.