From Heraldry of the World
Your site history : Perth (Australia)
Jump to navigation Jump to search 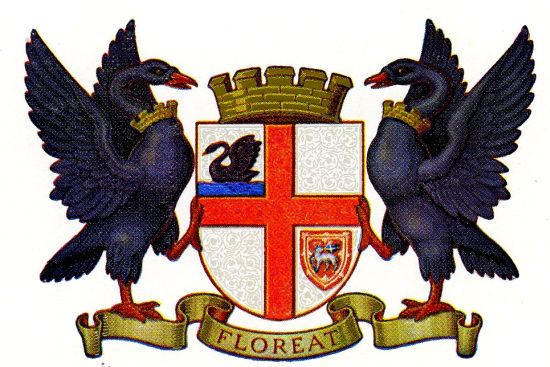 Arms : Argent, a Cross Gules, in the first quarter a Swan Sable upon water proper, and in the fourth quarter on an Escutcheon Gules within a double Tressure counter flory a Holy Lamb passant reguardant, staff and cross Argent with the banner of St Andrew proper, the whole ensigned with a Mural Crown Or.
Supporters : On either side a Swan wings elevated Sable, beaked and legged Gules, and gorged round the neck with a Mural Crown Or.
Motto: 'Floreat'.

The arms were officially granted on December 2, 1926.

The black swans refer to the fact that Captain Stirling, in a naval expedition prior to the foundation of the Swan River Settlement, afterwards named Perth, found that black swans were naturally prevalent on the estuarine river. The then Colonial Secretary, Sir George Murray, was M.P. for Perthshire, and was responsible for instructing Captain Stirling (afterwards the first Governor) to name the foundation area as the Swan River Settlement.

The original bearings granted in 1926 were added to in 1949 by the inclusion of the escutcheon shown in the fourth quarter, a feature taken from the armorial bearings of the City of Perth, the ancient Capital of Scotland, with which the Australian City has always associated itself.