From Heraldry of the World
Your site history : Pfarrwerfen
Jump to navigation Jump to search 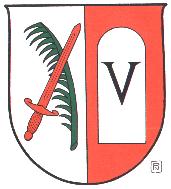 The sword and palm leaf are symbols of St. Cyriacus, the local patron saint. The village was also named St. Cyriak until the middle of the 19th century.
The left half shows a Roman distacnce marker with the letter V. This refers to the Roman postal station Vocario in the present municipality.