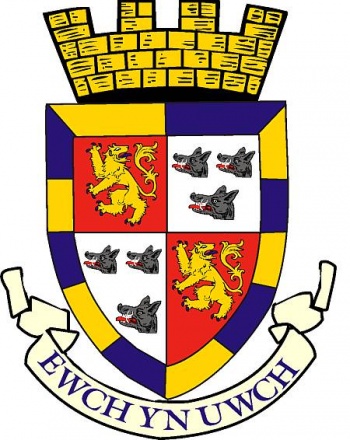 Arms: Quarterly first and fourth Gules a Lion rampant reguardant Or second and third Argent three Boars' Heads couped Sable all within a Bordure compony of the second and Azure; the Shield ensigned with a Mural Crown Or.
Motto: 'EWCH YN UWCH' - Higher and higher.

The arms were officially granted on November 21, 1950 to the former county of Radnorshire and on May 21 1974 to the Radnor Disctrict Council, which was renamed to Radnorshire District Council in 1989.

The arms are made up of charges from local families. The gold reguardant lion on red is for Elystan Glodrhydd, Prince of Wales c AD 1000. The black boars' heads on white are for his son Cadwgan. Around these is a gold and blue compony bordure from the arms of the Mortimers, Earls of March.