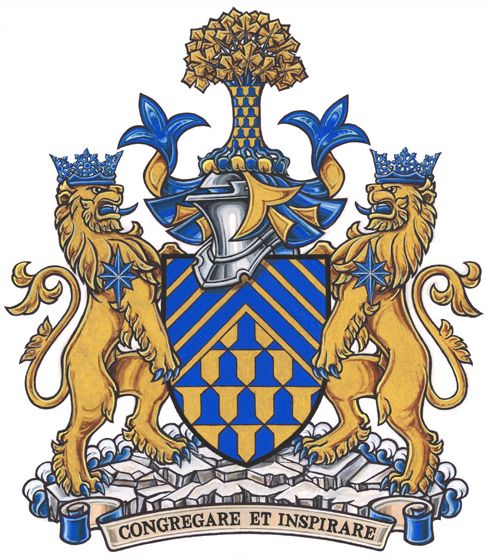 Arms : Per chevron in chief Or semé of chevrons throughout Azure, in base vairy Or and Azure
Crest : A maple tree eradicated vairy Or and Azure leaved Or
Supporters : Two lions Or each wearing a coronet of snowflakes and charged on the shoulder with a mullet Azure, standing on a rocky mount environed by waves proper
Motto: CONGREGARE ET INSPIRARE

Blue and gold are the colours of the flag of the Governor General of Canada and embody the unique relationship that links the Rideau Hall Foundation (RHF) with the Governor General and with the Office of the Secretary to the Governor General (OSGG). The lower section, which is made of interlocking and alternating gold and blue shapes, represents the objective of the RHF to bring together people and organizations in order to realize their dreams for Canada. The pattern also refers to the RHF’s values of cooperation, excellence and inclusion. The chevrons convey the idea of the ripple effect, as well as symbolizing leadership and the collective impact of the RHF’s achievements.

The maple tree represents Canadian society, with its leaves indicating a flourishing of new growth. The trunk of the tree, composed of the interlocking shapes in gold and blue, repeats the symbolism of the shield and recalls the goal of working together. Its roots symbolize the strength and supporting work of the RHF.

The lion, the emblem of the Governor General, much like the blue and gold, refers to the unique relationship that ties the RHF to the Governor General and the OSGG. The star on the shoulder of the lions refers to the North Star as well as to the ideas of direction and guidance for the RHF. The snowflakes of the coronets symbolize Canada. The base represents the Canadian Shield and the Pacific, Arctic and Atlantic oceans that surround Canada. Along with the maple tree of the crest, it indicates the pan-Canadian activities of the RHF.

The motto means “To gather and inspire” and summarizes the fundamental goals of the RHF, especially in the promotion of learning, leadership, giving and innovation.