From Heraldry of the World
Your site history : Rowley Regis
Jump to navigation Jump to search 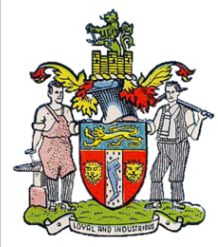 Arms : Gules on a Pale Ermine between two Lions' Faces Or a Human Leg couped at the thigh a Chief Azure charged with a Lion passant Or.
Crest : On a Wreath Argent and Gules a Castle of three Towers Or issuant from the battlements a demi Lion queue forchée Vert holding between the paws an Anchor and charged on the shoulder with a Fleur-de-Lis Or.
Supporters : On the dexter side in front of an Anvil a Man habited as a Smith holding in the dexter hand a Hammer and on the sinister side a Man habited as a Miner holding in the sinister hand a Pick resting on his shoulder and a Safety Lamp hanging around his neck.
Motto 'LOYAL AND INDUSTRIOUS'

The arms were officially granted on September 20, 1933.

The lions' faces indicate that Rowley Regis was formerly part of the royal domain, also indicated by the last part of its name. The ermine pale is from the arms of the Ward family, to which belongs the present Earl of Dudley. The leg and lion passant are from the heraldry of the Haden and Somery families respectively.

The fork tailed lion is from the arms of Sutton, Lord Dudley, to whom the Manor was granted in the sixteenth century and the fleur-de-lis stands for Halesowen Priory.

The supporters and anchor refer to local industries.