From Heraldry of the World
Your site history : Sale (Victoria)
Jump to navigation Jump to search 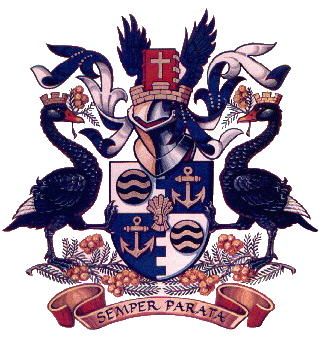 The town was probably named after General Sale, who was distinguished in the Burma War (1824-25) and the Safghan Wars of 1838 and 1842. He was a long-standing army friend of Lord Brisbane, Governor of New South Wales, the Colony in which the territory of Victoria was then administered. He is remembered by the embattled dividing line down the centre of the shield.
The wheat sheaf alludes to the district's agricultural economy, while the anchors refer to Sale's importance to the former coastal shipping.
The roundels symbolize the modern oil and gas industry, with Sale being headquarters for the Esso-BHP Bass Strait operations.

In the crest the wings symbolize the RAAF base at East Sale and the book, a Bible, alludes to the churches and schools in the City.