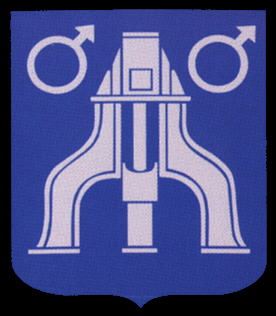 The arms were officially granted in 1943.

Sandviken is a young town centered around a steel manufacturing company (Sandvik). The town was founded around 1862 (when the company was formed) at a strategic location by a lake and on the relatively new railway between Gävle and Falun, established in 1859. The founder Göran Fredrik Göransson was the first to produce steel with the so-called Bessemer method which involves providing coal and oxygen to cast iron melt in order to produce high grade steel. This turned the company into one of the more successful players on the world market for special steels.

The town was given city rights in 1942. The local newspaper announced a competition to produce a drawing for a new coat of arms, the results of which were given to the National heraldic Council for reworking. Originally the city committee wanted the arms to include the so-called bessemer-converter, a steam hammer and the steel symbol.

The city council decided to accept the national heraldic council suggestion of only the steel hammer and the iron symbols on 17 April, 1943. It is not strange that the city arms show one of the large steam driven hammer used for producing steel bars to be used in making other steel products elsewhere in the plant. An example of the hammer is on display in a park near the Sandvik headquarters.