From Heraldry of the World
Your site history : Sanem
Jump to navigation Jump to search 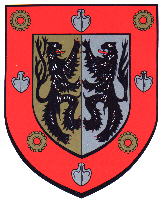 The area historically was a possession of the Lords of Soleuvre and the Lords of Salem, who both used a black lion in a silver field, sometimes armed red, sometimes not. In the new arms the two lions are show, with a golden field for the lion of Soleuvre, as the larger part of the territory belonged to the Lords of Soleuvre. The bordure represents the other two villages in the municipality, the wheels for the village of Belvaux, the spades Ehlerange. Belvaux is an industrial village, whereas Ehlerange is a mainly agricultural village.