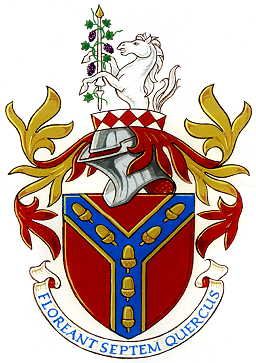 Arms : Gules on a Pall Azure fimbriated Argent seven Acorns Or.
Crest : Out of a Circlet Argent charged with eight Lozenges throughout Gules a demi Horse supporting a Lance erect Argent tipped Or entwined about with a Branch of Vine fructed proper; Mantled Gules doubled Or.
Motto: 'FLOREANT SEPTEM QUERCUS' - May the seven oaks flourish.

The arms were officially granted on December 3, 1964 and transferred to the town council on April 16, 1975.

The seven golden acorns refer to the name sevenoaks and were previously used on the unofficial arms used by the Council. Its design was very similar to the arms believed to have been borne by William Sevenoke, the founder of Sevenoaks School, in the 15th century and still used by that school as "Founder's Arms".

The blue Y-shaped pall is suggested by the arms of the Archbishops of Canterbury, who held the Manor of Sevenoaks as part of that of Otford. It also represents the the road junction, which was a major factor in the development of the town. The colours of gold and red are also the main colours of the arms of the Sackville family, who owned Knole House in Sevenoaks for many centuries.

The silver circlet with red lozenges are taken from the arms of Bosville, a notable local family. The white horse is from the arms attributed to the ancient Kingdom of Kent and now borne by the Kent County Council. The lance is similar to those in the crest of the Amherst family and the vine is a reference to the historic Vines cricket ground in Sevenoaks and is also said to suggest another local family, Lambard, who owned Vine Court.

The badge conbines the seven golden acorns from the arms with a silver estoile, from the crest of the Sackville family. Here the rays are increased to seven to fit with the acorns.