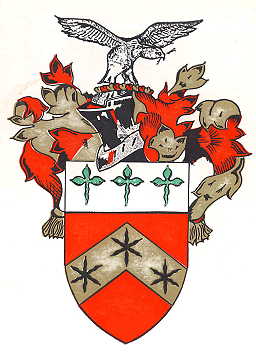 Arms : Gules on a Chevron Or three Estoiles Sable on a Chief Argent as many Trefoils slipped Vert.
Crest : On a Wreath of the Colours an Eagle wings extended and head downwards and to the sinister proper holding in the beak an Ear of Wheat stalked and leaved Or.

The lower portion of the shield is the arms of the Carre family, closely associated with the town in the sixteenth and seventeenth centuries, and founded of the local almshouses and grammar school. The three trefoils are from the arms of the Herveys, Marquesses of Bristol and Lords of the Manor.

The eagle refers to the town's links with the R.A.F., especially through the R.A.F. College at Cranwell. The ear of wheat refers to agriculture.

The arms are presently used by the town council

Literature : Information provided by the North Kesteven council and http://www.civicheraldry.co.uk