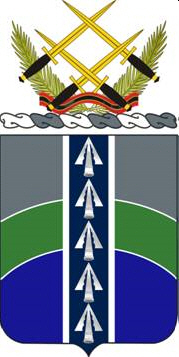 Shield: Per fess arched Celeste (Light Blue) and Azure a fess arched Vert edged Argent, overall a pale of the last surmounted of another Azure (Dark Blue) charged with five pheons erect Argent (Silver Gray).
Crest: From a wreath Argent and Celeste (Light Blue), two palm fronds in chevron reversed Vert superimposed at base by a banner, Gules, Or and Sable, overall four daggers interlaced fretwise, blades and garnish of the fifth, hilt and pommel of the sixth.
Motto: POINT OF THE DAGGER.

Shield: The background colors symbolize the unit’s ability to deploy worldwide in a timely manner; light blue refers to the air, green implies the earth/land and blue is for the sea. The pale denotes military strength and dark blue is the color traditionally associated with Infantry units and emphasizes the Battalion’s promptness to enable the Brigade and other Battalions within the Brigade with military intelligence, signal, engineer, military police, chemical, biological, and nuclear capabilities. The pheons signify readiness and allude to the five components that comprise the Special Troops Battalion: military intelligence, signal, engineer, military police and chemical, which are crucial to success of the Brigade on the battlefield.

Crest: The palm fronds denote honor, symbolizing the decorations awarded for service in Vietnam and Iraq. The banner signifies reward for valiant service and indicates the Battalion’s Superior Unit Award. The daggers in fret illustrate the unit’s four campaign credits.