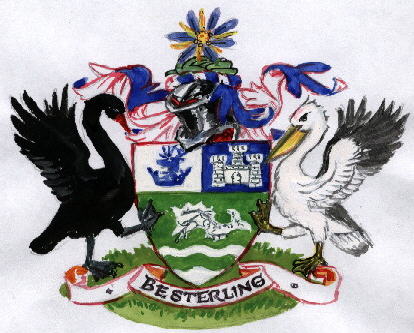 The first quarter of the arms shows the crest of Governor James Sterling, who founded the city. The second quarter shows a castle and refers to the castle in Sterling, Scotland.

The lower part shows a dolphin and symbolises the ocean bordering Stirling. The supporters are the swan, taken from the arms of Western Australia, and a pelican, a common bird in the Swan river and the lakes around the city.

The crest shows a Dianella flower, a common plant in the area. The suburb Dianella is also named after the plant.
The motto is taken from Shakespeare's Richard II, Act 4, Scene 1, 'sterling' meaning here a mark of excellence.

Literature : information send to me by the Stirling City Council