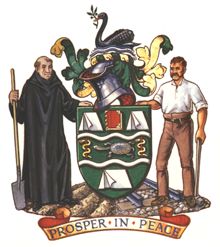 The tortoise inhabits Shenton Park Lake, the two rods of Aesculapius (the Greek God of healing and medicine) represent the Princess Margaret and King Edward Hospitals, the tents indicate early form of habitation in lay settlement, and the book alludes to the university of Western Australia.

The crest shows a black swan typical of Western Australia, with olive branch in beak, allusive to olive trees planted in early days by Benedictine monks and later by the city, and also in the motto "Prosper in peace", swimming on water allusive to the Swan River.

The supporters are a monk and a railway worker. The Benedictine monk with a spade to till the soil upon which he stands is allusive to the monks who established a monastery in the neighbourhood in 1851 which they named "New Subiaco" after St. Benedict's first monastery in Italy. The railway worker from around 1881 upon a section of track, is an allusion to the building of the railway through the area and of the station named Subiaco from which the area and municipal district took its name.