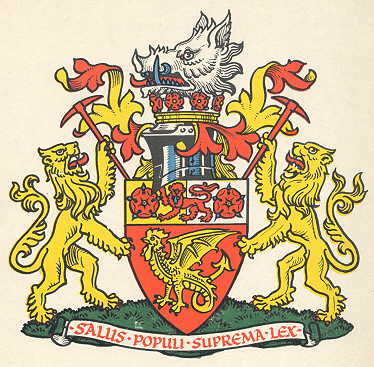 Arms : Gules a Cockatrice Or on a Chief per pale of the second and Argent a Lion passant guardant between two Roses of the first barbed and seeded proper.
Crest : On a Coronet composed of six Roses Gules barbed and seeded proper set upon a Rim Or a Boar's Head erased Argent armed Azure.
Supporters : On either side a Lion rampant Or holding in the interior paw a Pickaxe Gules.
Motto: 'SALUS POPULI SUPREMA LEX' - The welfare of the people is the highest law.

The arms were officially granted on October 1, 1934.

The boar's head or swine's head is an allusion to the breeding of swine for which Swinton was noted in early days. The coronet consists of Lancastrian roses.

The two lions for the supporters constitute a further allusion to the arms of the Langley family, and the pickaxes indicate an important local industry, that of coal mining.