From Heraldry of the World
Your site history : Taber
Jump to navigation Jump to search 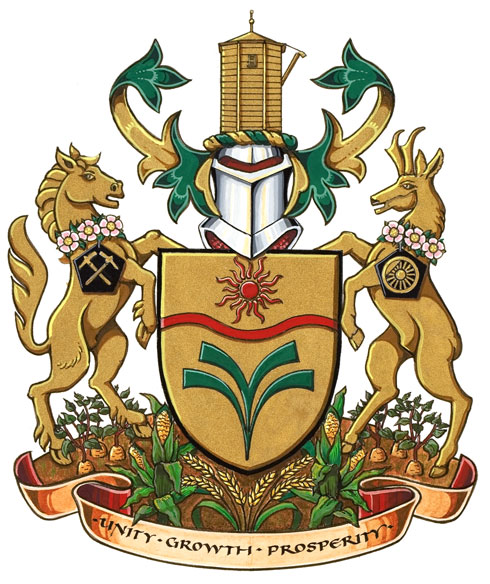 Arms: Or a barrulet wavy enhanced between in chief a sun in splendour Gules and in base two chevronels reversed couped embowed and conjoined in apex Vert;
Crest: A railway water tank Or;
Supporters: Dexter a horse, sinister an antelope Or, each gorged with a collar of wild roses proper pendent therefrom a pentagon Sable, the dexter charged with two pickaxes in saltire and the sinister charged with a locomotive wheel Or, both standing on a mound of earth set with sugar beets, corn, and wheat proper;
Motto : UNITY • GROWTH • PROSPERITY;

The gold shield represents the sun shining on the verdant earth in the area. The spray (the V-shapes) can symbolize a plant reaching for sunlight, an irrigation water-spray, a gusher produced when hitting oil, and a progressive people and community, reaching for the future, always looking up to better things. The wavy bar recognizes the effect of the wind on the surrounding area.

The watertank represents watertank number 77 that served the early engines of the railroad in Taber and that was the genesis of the town.

The horse signifies the “pit ponies” used in the coal mines. It also represents the “horse power” of transportation in its various forms, the use of horses in agriculture, the herding of livestock, and the western heritage and culture of cowboys. The antelope represents local fauna. The collar of wild roses represents the province of Alberta. The pentagons emphasize the relationship of the town to its origin of coal mining and rail transportation. Their shape alludes to both coal and the structure of the watertank. The coal fed railway engines, represented by the locomotive wheel. The compartment holds examples of local crops.