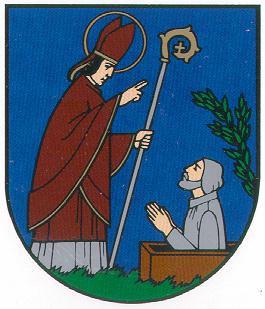 On April 6, 1845 the city received new arms, with in the upper half the arms of the Province of Kaunas (an obelisk) and in the lower a golden caduceus, symbol of the God Mercury and of commerce.

In 1881 the saint returned in the arms of Telšiai again, but was banned again in 1885. Between 1920-1939 the old arms with the saint were again in use. The symbol was unofficially used until 1970, when all religious symbols were banned.

In 1970 the city received completely new arms, showing a bear holding a tree, derived from the old arms of the Samogitian county, to which the city historically belonged. It was again abolished in the same year.

Finally on December 21, 1991 the present (and historical) arms were granted.