From Heraldry of the World
Your site history : The Episcopal Church
Jump to navigation Jump to search 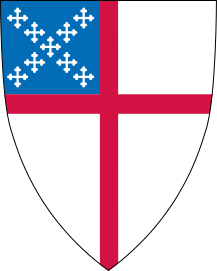 Argent a cross throughout gules, on a canton azure nine cross crosslets in saltire of the field.

The Cross of St George alludes to the Church of England and the Anglican heritage of the Episcopal Church. The Canton with the Crosses in Saltire alludes to Scotland and commemorates the bestowal of the episcopate upon the "American Church" by the Bishops of the Scottish Episcopal Church when Samuel Seabury was consecrated the first Bishop of Connecticut at Aberdeen on November 14, 1784. The Number of the Crosses nine symbolises the original nine Dioceses of the Episcopal Church: Connecticut (1783), Maryland (1783), Massachusetts (1784), New Jersey (1785), New York (1785), Pennsylvania (1785), South Carolina (1785), Virginia (1785)and Delaware (1786). The Coat of Arms was adopted in 1940.