From Heraldry of the World
Your site history : Uzerche
Jump to navigation Jump to search 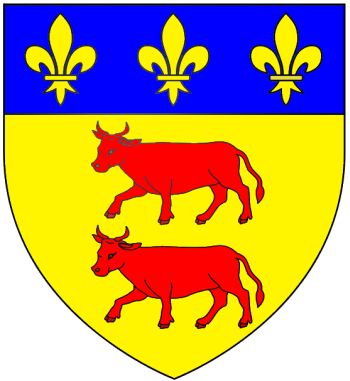 The arms show two bulls under a chief of France. The arms are based on a stone carving in the municipality and the old medieval seal of the city.

The origin of the bulls is not known, but are 'explained' in the local legend :
In 8th century, a Saracen force defeated by Karel Martel attacked and besieged Uzerche during their retreat. The siege lasted seven years, but the Saracens ultimately gave up after a last desperate action by the inhabitants. On the point of starvation, they had fattened up the last two of their cattle with the last of their food. They then chased the animals out of the town towards the besiegers. The Saracens, upon seeing the animals, concluded that the city was too well provisioned for them to waste any more time trying to starve them out. To the present day two bulls can be seen on the coat of arms of Uzerche as a reminder of the siege.

The Royal chief of France was granted in 1374 by King Charles V of France in recognition of the strong defence shown by Uzerchois against the English.

The two cows also appeared on older arms, used from the 19th century until 1977, see image below. The origin of these arms is not known.