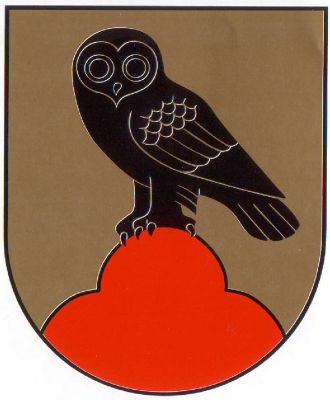 The owl symbolizes education, and in particular the teachers' seminary, which was established in 1866 (and operated until 1914) with the intention of the Russian regime (1795-1914) to make it a centre of assimilation, but instead it became the seedbed of Lithuanian national movement and of enlightenment.

The red hill in base refers to the Hill of Sorrow, where the local Lithuanian partisans were laid to rest: the Soviet regime did not allow burying partisans properly but pitted them in trenches (inhabitants of Veiveriai built crosses on those places secretly), so only after the collapse of Soviets the remains were treated respectfully and re-buried properly.