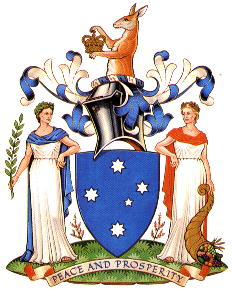 Arms : Azure, five Stars Argent, representing the Constellation of the Southern Cross.
Crest : On a Wreath of the Colours, a demi­ Kangaroo proper, holding in the paws an Imperial Crown Or.
Supporters : On the dexter side a Female Figure (representing Peace) proper, vested Argent, cloaked Azure, wreathed round the temples with a Chaplet, and holding in the exterior hand a branch of Olive also proper; and on the sinister side a like figure (representing Pros­perity), vested Argent, cloaked Gules, wreathed round the temples with a Chaplet of Corn, and supporting with the exterior hand a Cornucopia proper.
Motto: 'Peace and Prosperity'.

The arms were granted on ?

The arms show the four stars of the Southern Cross. The two supporters symbolise Peace and Prosperity (with the horn of plenty). They also represent the motto. Between the shield and the supporters is the state's floral emblem, the pink heath. The kangaroo holds the royal crown.