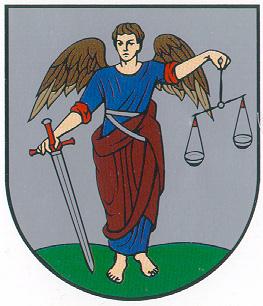 Virbalis, originally named Nova Volia was granted city rights on June 15, 1593 by Sigismundus Vasa. At the same time he granted the city an angel showing an angel with sword and scales.

The angel most likely is the archangel St. Michael, a popular saint at the time. The symbols indicate struggle and justice (or good and evil), and at the time it was a symbol of Catholicism against Protestantism. The angel was used on the seals of the city until the late 18th century.

No specific emblem was used until June 12, 1993 when the present arms were granted, 400 years minus 3 days after the original arms.