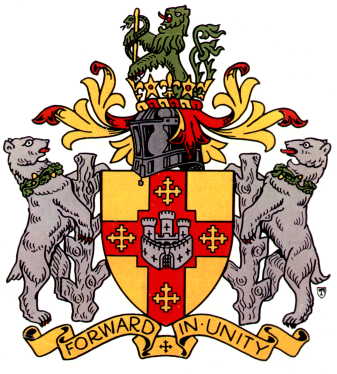 Arms : Or on a Cross quadrate Gules a Castle of three Towers within a circular Wall in perspective pierced by a Port with Portcullis Argent between four Cross crosslets Or.
Crest : On a Wreath of the Colours within a Circlet of four Fleurs de Lys and four Mullets Or pierced Gules alternately a demi Lion queue-fourchee Vert supporting a Rod of Esculapius proper.
Supporters : On either side a Bear supporting a ragged Staff Argent and gorged with a Wreath of Oak fructed proper.
Motto: 'FORWARD IN UNITY'.

The arms were officially granted on November 13, 1975.

The supporters are the familiar bear and ragged staff of Warwickshire, made distinctive by a collar of oak. 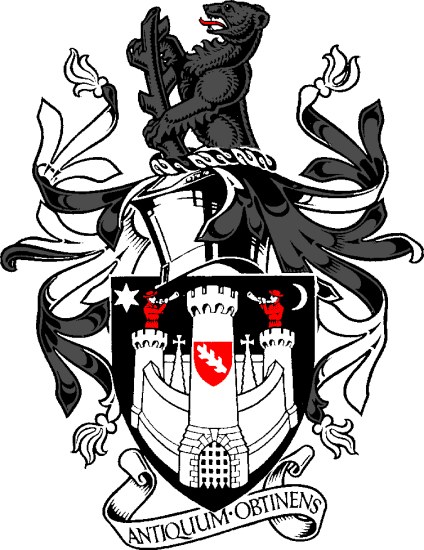 Arms : Sable a Walled Town with three Towers Argent issuing from each of the flanking Towers a demi Figure representing a Nightwatchman respectant winding a Horn Argent habited and capped Gules the central Tower charged with an Escutcheon Gules thereon a ragged Staff bendwise between in chief a Mullet of six points and an Increscent Silver.
Crest : On a Wreath of the Colours a demi Bear supporting a ragged Staff Sable.
Motto: 'ANTIQUUM OBTINENS' - Possessing antiquity or Holding fast to tradition.

The arms were granted in 1964, but are practically identical to the ancient seal of the Borough, which was recorded at the heraldic visitations to the county of Warwickshire in 1619 and 1682. This design appears to have been in use since the incorporation of Warwick in 1545.

The common seal showed a walled town with towered gateway, with two outer towers from which watchmen were winding their horns and two inner towers with spires. On the middle tower was an inecutcheon bearing a ragged staff, and at the top of the seal were a six pointed star and a crescent moon. When the arms were formally granted the field was fixed as sable, and the other charges as argent, save the watchmen's clothing and the inescutcheon which were made gules.

A crest was added, the famous Warwickshire (as found in the Warwickshire County Council arms) emblem of the bear and ragged staff, here coloured black.

The motto is ANTIQUUM OBTINENS or Holding Fast to Tradition.

The arms are now used by the Town Council.