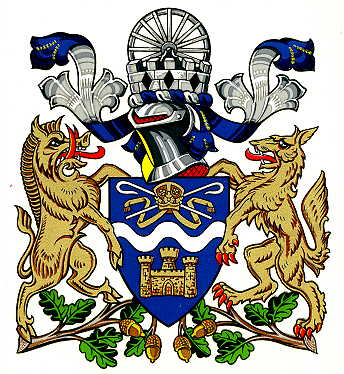 Arms : Azure a Fess wavy Argent between in chief in front of two Shepherd's Crooks in saltire Argent a Mitre affronty encircled with a Coronet Or the infulae entwined with the crooks and in base a Castle of three towers Or.
Crest : On a Wreath of the Colours issuant from a Mural Crown Argent charged with six Lozenges three being manifest Sable a representation of the Killhope Wheel proper.
Supporters : On the dexter side a Boar Or armed and langued Gules and on the sinister side a Wolf Or each standing upon a Branch of Oak fructed proper.

The blue field is taken from the arms of the Durham County Council and Bishopric of Durham. The white wave suggests a river and at the same time resembles the initial W of wear Valley. Gold mitre is that of the bishop of Durham and stands for the town of Bishops Auckland.
The two white crooks behind it are for Crook and Willington Urban district council.
The gold castle in base represents three important castles in the district - Dan's Castle at Tow Law, The Bishop's Castle at Auckland and Stanhope Castle at Weardale.

The mural crown from which the crest rises is coloured to stand for the quarrying of limestone. it is charged with black lozenges, symbol of coal mining. The crest itself is a representation of Killhope Wheel, a monument to the lead mining industry. The gold boar and wolf which stand upon oak branches in their proper colours represent Weardale Forest. the gold wolf also comes from the arms of the Stanhope family.