From Heraldry of the World
Your site history : West Torrens
Jump to navigation Jump to search 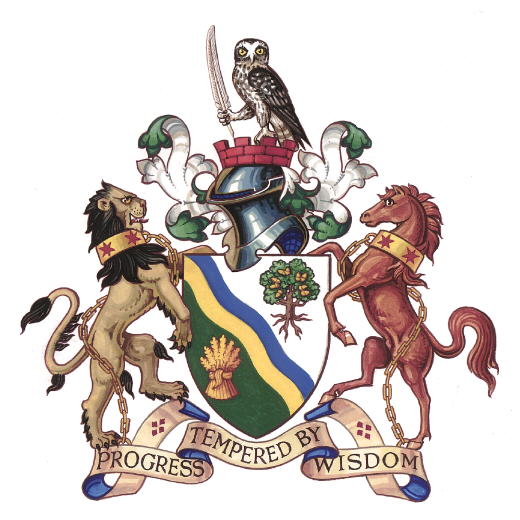 The blue wavy line on the shield refers to the Torrens River and its tributary the Sturt. The gold line represents the Anzac Highway which runs through the City, having been renamed in 1918 after the soldiers who fell during World War 2. The oak tree (not native to Australia!) symbolises the wooded areas cleared by the first settlers, and the subsequent plantings to beautify the City.
The wheat sheaf recalls the district's original farming economy.

In the crest the mural crown represents civic authority, while the Boobook Owl with a quill represents management governed by wisdom, and idea reflected in the motto. The horse honours their part played in pioneering the district, while the lion refers to the British origins of the early white settlers. The collars and chains represent control and authority, while the stars, each with 6 points for the wards of the City, allude to the 130 years between the municipality being first proclaimed (1853), and the year the Arms were granted (1983).