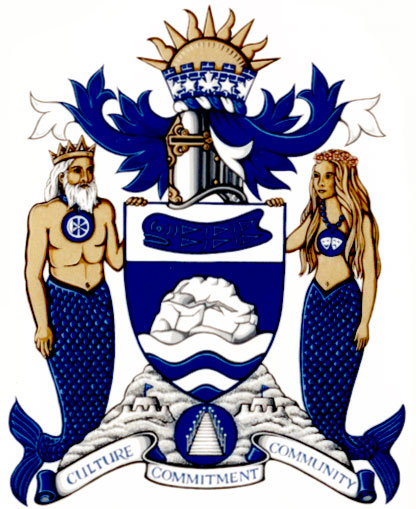 Arms : Azure issuant from barry wavy of four Argent and Azure a representation of the landmark White Rock Argent on a chief also Argent a Salish salmon Azure.
Crest: A mural coronet Azure masoned Argent charged with maple leaves alternating with mullets also Argent issuant therefrom a demi sun Or.
Supporters: On a compartment of sea sand between two sand castles proper flying pennants to the sinister Azure a hurt charged with a representation of the White Rock pier Argent dexter a merman Or crined and bearded Argent tailed Azure wearing a coronet Or and gorged with a collar Azure pendant therefrom a hurt charged with a locomotive wheel Argent, sinister a mermaid Or tailed Azure wearing a coronet of pink roses Proper barbed Vert gorged with a necklace Azure pendant therefrom a hurt charged with the masks of tragedy and comedy Argent.
Motto: CULTURE · COMMITMENT · COMMUNITY

The arms were officially granted on February 16, 1992.

If you have any information on these arms Rock mail us !